Anchor Point: The definitive guide to Morocco’s most beloved wave 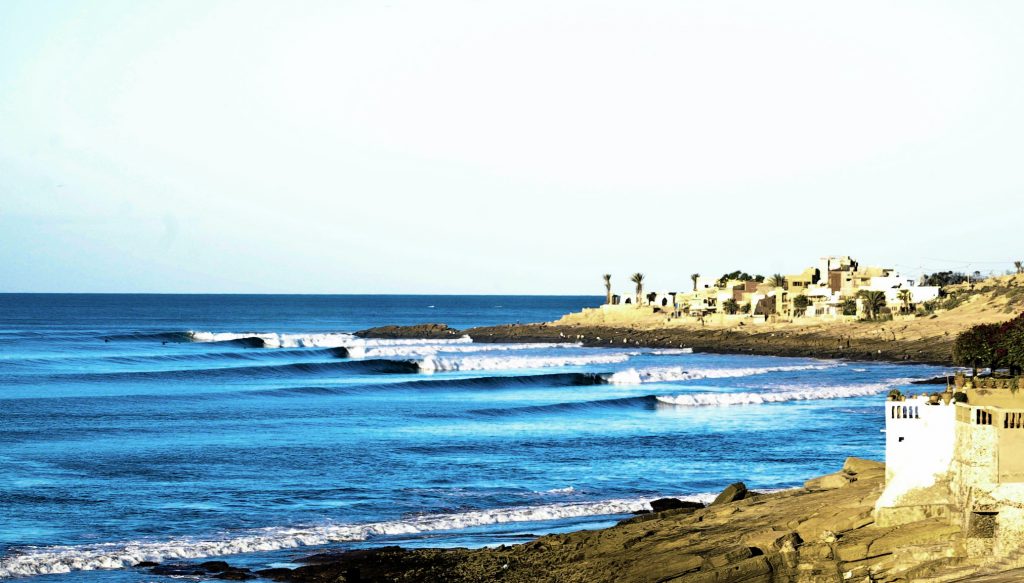 Most surfers (and even a few non-surfers) have heard of Anchor Point. It’s Morocco’s most beloved wave and quite possibly its most photographed. But how much do you really know about this righthand pointbreak? Like, do you know where it is, how to surf it best or what it looks like on a good day?

Whether you’ve surfed it a million times or not at all, we created this handy guide to answer these very questions.

Let’s get into it!

Anchor Point at a glimpse

Anchor Point, Morocco, is one of the most famous waves in the world. A righthand pointbreak that can easily hold waves up to double or even triple overhead, it’s a mecca for traveling surfers and locals alike.

The wave is located just outside of the town of Taghazout, about a 30 – 45 minute drive south of Agadir. And while it can get crowded on a good day, Anchor Point has multiple takeoff zones that help to spread out the horde of hungry tube hounds. The wave itself jacks up on a rock shelf and barrels out the back. Then, as it runs down the line, there are different sections that either wall up or tube.

We recently had the pleasure of watching Anchor Point do all this and more (see slideshow below). And we can say with confidence that on its day, it rivals any wave in the world. 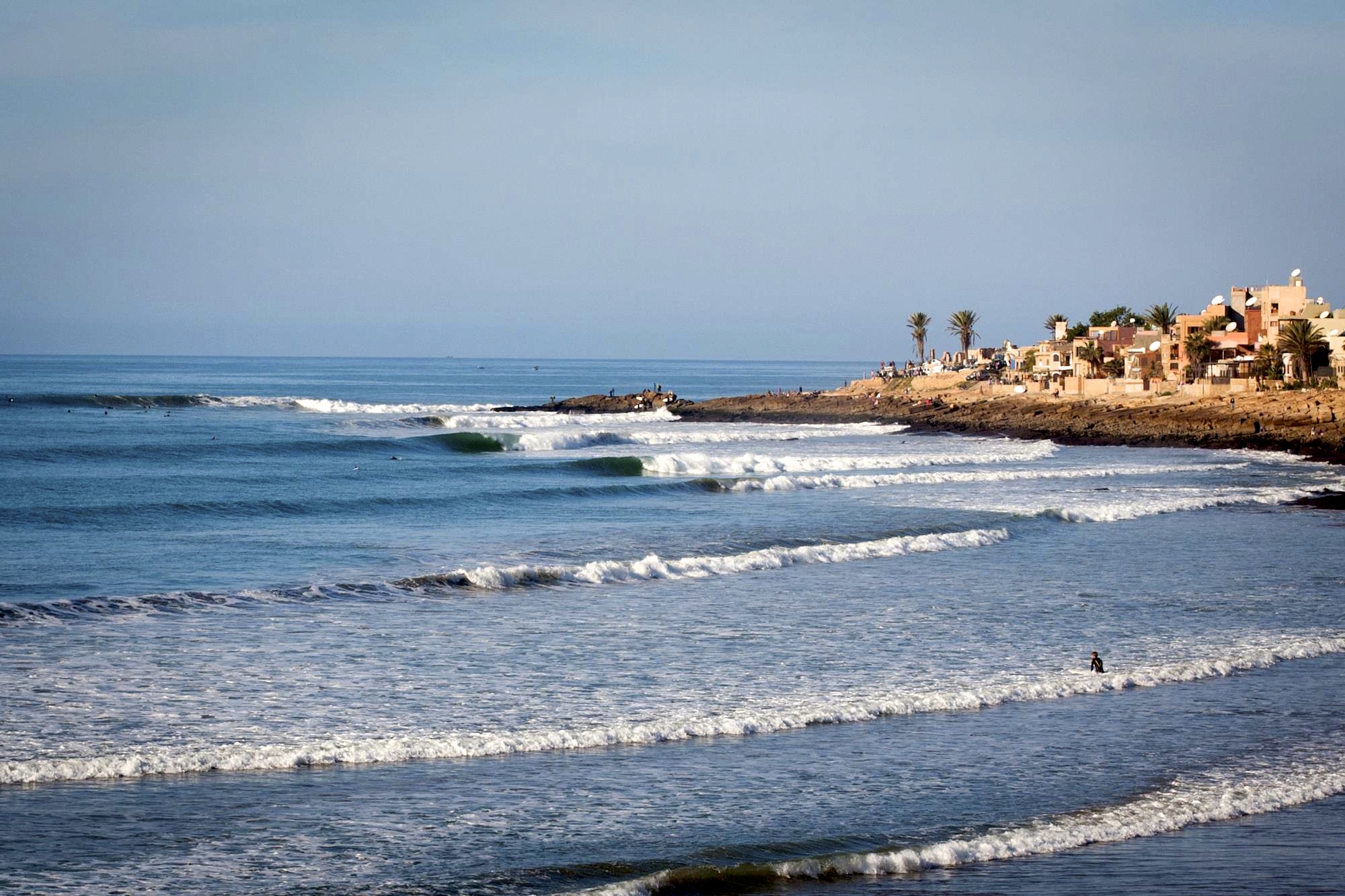 The history of Anchor Point, Morocco

Anchor Point is the English name given to a surf spot called Almadraba in Arabic.

This name was bestowed upon it by early inhabitants due to its rich fishing grounds, but it also refers to an ancient technique for catching bluefin tuna that involved suspending nets in walls that guide the fish to a central net trap.

Supposably, Anchor Point (or Anka Point) was first surfed by traveling Australian surfers back in the early 1960s. However, there are rumors that surfers from Europe were riding the wave before that.

One can only imagine how incredible those early days were!

No people. No amenities. No ding repair or surf shops. Totally foreign! Surfing Anchor Point before it became North Africa’s most famous surf destination must have been a thrilling adventure. 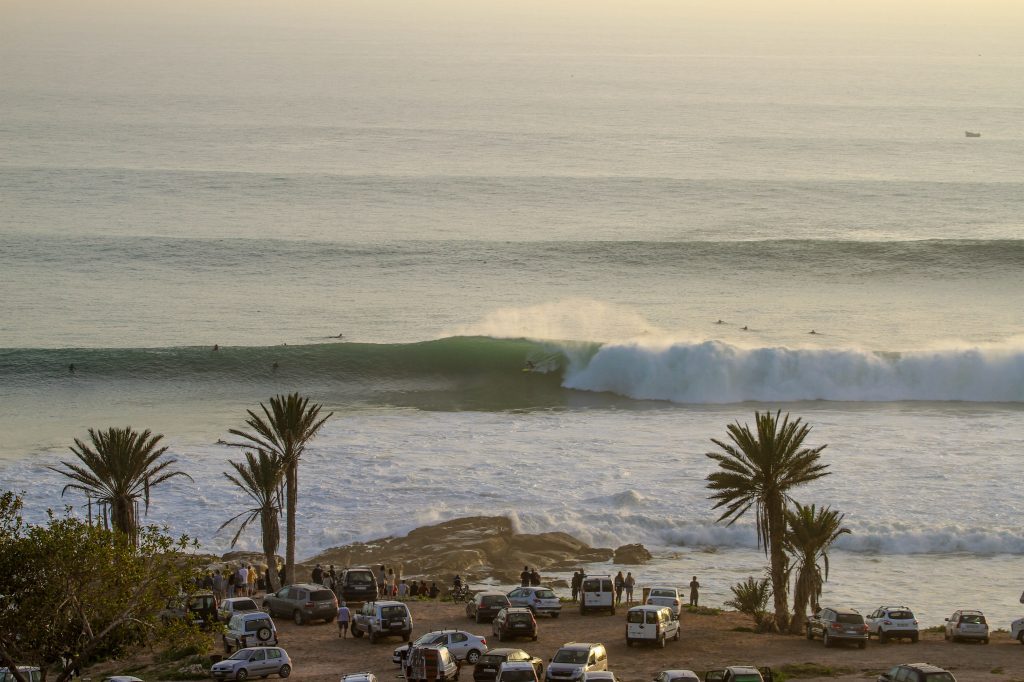 Where is Anchor Point located?

Anchor Point is located in Morocco, about 25 kilometers from the airport city of Agadir and a 5-minute walk from the trendy Taghazout.

Its exact location is on the left-hand side if you’re driving north from Taghazout to Essaouira on National Road N1. There’s a large carpark right in front of the break. And it’s here where you can often find tea and coffee vendors selling their wares – perfect if you need a little caffeine pick-me-up first thing in the morning! 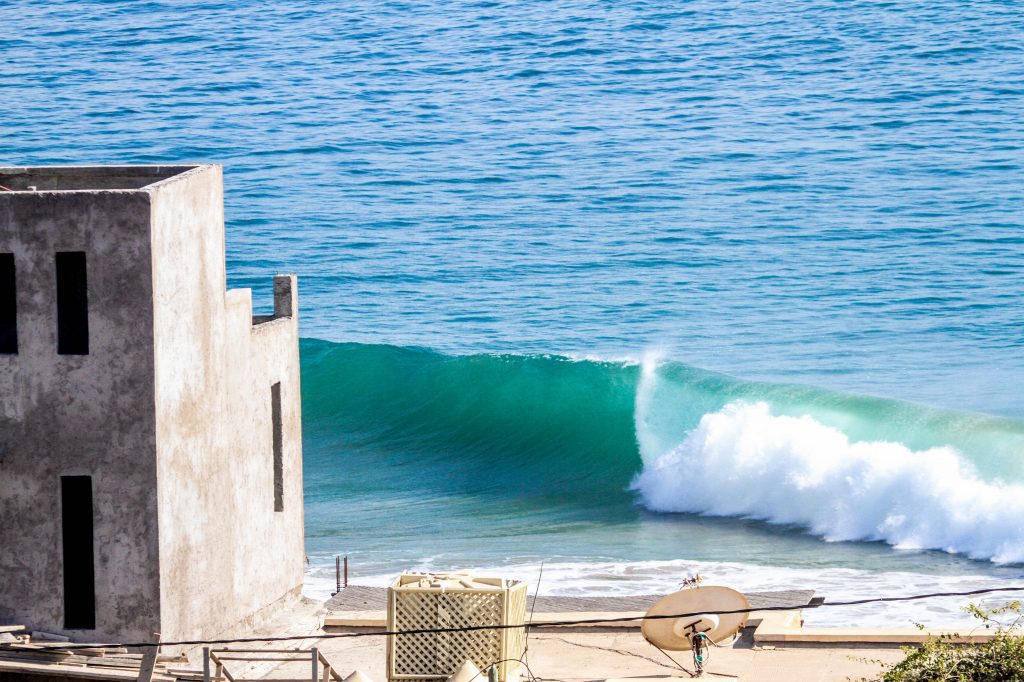 What are the optimal conditions for Anchor Point?

Like most surf spots in the Northern Hemisphere, Anchor Point doesn’t put on its best display until the autumn and winter months roll around.

September to March is generally accepted as being the prime Anchor Point season. It’s during these colder months that large pulses of northwest swell march towards Morocco’s coastline.

Once they hit our shores, Anchor Point becomes a surfer’s playground that offers up some of the longest, most powerful righthand walls in surfing. On a good day you can easily catch waves that run for up to 500 meters.

In saying that, Anchor Point can have decent waves out of season too. It really depends on the swell. There are the odd spring and summer days when Anchor Point will turn on. When this happens, it’s on for young and old. And everyone from experienced surfers to intermediates.

What are some local tips for surfing Anchor Point?

We’ve been surfing Anchor Point since the late 90s and in that time we’ve learned a thing or two. Below are just a few of the main tips that we and the local crew are happy to share.

Observe the rules of surf etiquette

As you might already know, there’s a list of unwritten rules that all surfers should abide by. And given that Anchor Point can get quite crowded when it’s pumping, observing these rules (called the Basic Rules of Surf Etiquette) is the most important advice we can give you.

Be polite and friendly, say hello and give a smile you’re on holiday!  Never drop in. Don’t snake. Resist the temptation to ditch your board when people are behind you. Don’t surf out of your safety zone, and endanger others. If you follow these surf etiquette rules and be respectful, a fun and safe surf is all but guaranteed.

Learn how to rock jump

Sure, you can paddle hundreds of metres from the beach to reach the lineup, but more advanced surfers prefer to jump from the rocks.

Whether you do this from the sandy bay behind the Point or off the two inside jump points, it doesn’t matter – it’s daunting when it’s big and you need to know how to perform your jump safely.

The first thing you need to do is read the conditions. Anchor Point can have a strong backwash and there are also powerful currents that can create an almost whirlpool effect. If you’re not confident, it’s always best to paddle out (less you end up like this poor bloke).

If you’ve rock jumped once or twice before and you feel comfortable though, perhaps watch other surfers first before you attempt to dive in. Also, keep in mind that the paddle-in is worse when it’s large, as the whitewash makes climbing back up those same rocks super tricky, so be wary!

Perfection can be deceiving and we’ve seen lots of people paddle out at Anchor Point who have no business being there. All too often we see guys way out of their depth and putting other surfers at risk.

They watch a wave break almost mechanically down the point and think, “Hey… that looks easy”. The truth is though that in order for Anchor Point to break like that, there must be a considerable amount of swell. So if you’re not used to surfing large powerful waves, give it a miss. We can always find you somewhere else to surf that’s suitable for your levels.

Go with a surf guide

The local Taghazout surf crew is a friendly bunch. And many of them have made a living out of teaching other locals, expats, and traveling vacationers how to read waves, navigate a lineup, and ultimately surf.

This makes them experts when it comes to surfing Anchor Point and the many other waves in the region. So if you want to surf the best waves possible or score this memorable point at its best, talk to us about arranging a surf guide.

Not only will they put you in the right spot at the right time, but surf guiding is also an excellent way to connect with the local culture and see more than just Taghazout.

Is there accommodation on Anchor Point?

In terms of accommodation, Anchor Point itself is still relatively undeveloped. This is a good thing, as it ensures that the wave remains a scenic spot to surf.

That being said, if you want to stay somewhere that’s close to both Anchor Point and Taghazout, we have a couple of awesome accommodation options with views of the break!

Amouage is our boutique hotel that’s located on the oceanfront and designed to be a haven for those who want a curated holiday experience consisting of (not in this order) surf, yoga, and good times. It’s good lively public areas, a spa, a rooftop yoga garden, an infinity pool, and a bar.

If you’re looking for an alternative to Amouage though, we also have Taghazout Villa. Located a short distance from Amouage and Anchor Point, Taghazout Villa is an ultra-chic guesthouse with a laidback vibe and family-like atmosphere that’s become one of Morocco’s best-known and most loved surf lodgings.

Regardless of which one you choose, both Amouage and our Taghazout Villa are only a short stroll or drive away from Anchor Point! 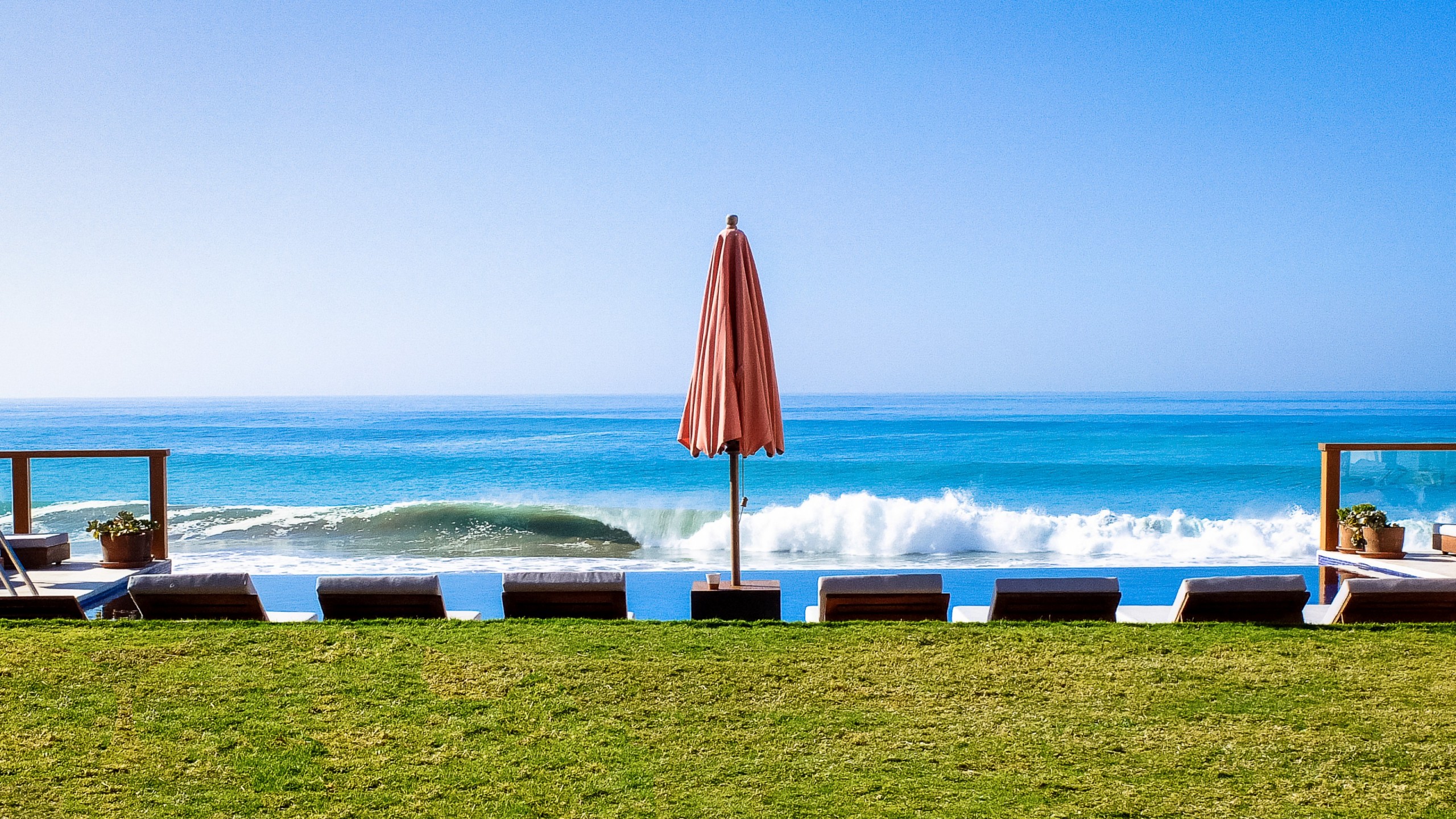 Have you heard whispers of the fabled Anchor Point? Because those stories of long walls, perfect barrels, and life-changing surf experiences are all true! Discover for yourself why Anchor Point is Morocco’s most famous wave by planning a surf trip with us.